Hailing from the Mitten state, this beatsmith adds heart, horsepower, and harmony from the back of the house. With over a decade behind the kit, he has an ear for good timing and good times. His daily soundtrack is likely to include everything from second-liners to double-kick heavies, including artists Stanton Moore (Galactic, etc), Will Calhoun (Living Colour) and John Bonham (Zep), among many others. Faris has driven the sticks for numerous projects, several of which with good friend and SGL bassist, Matt Mahoney. 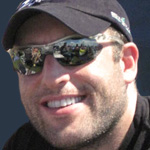